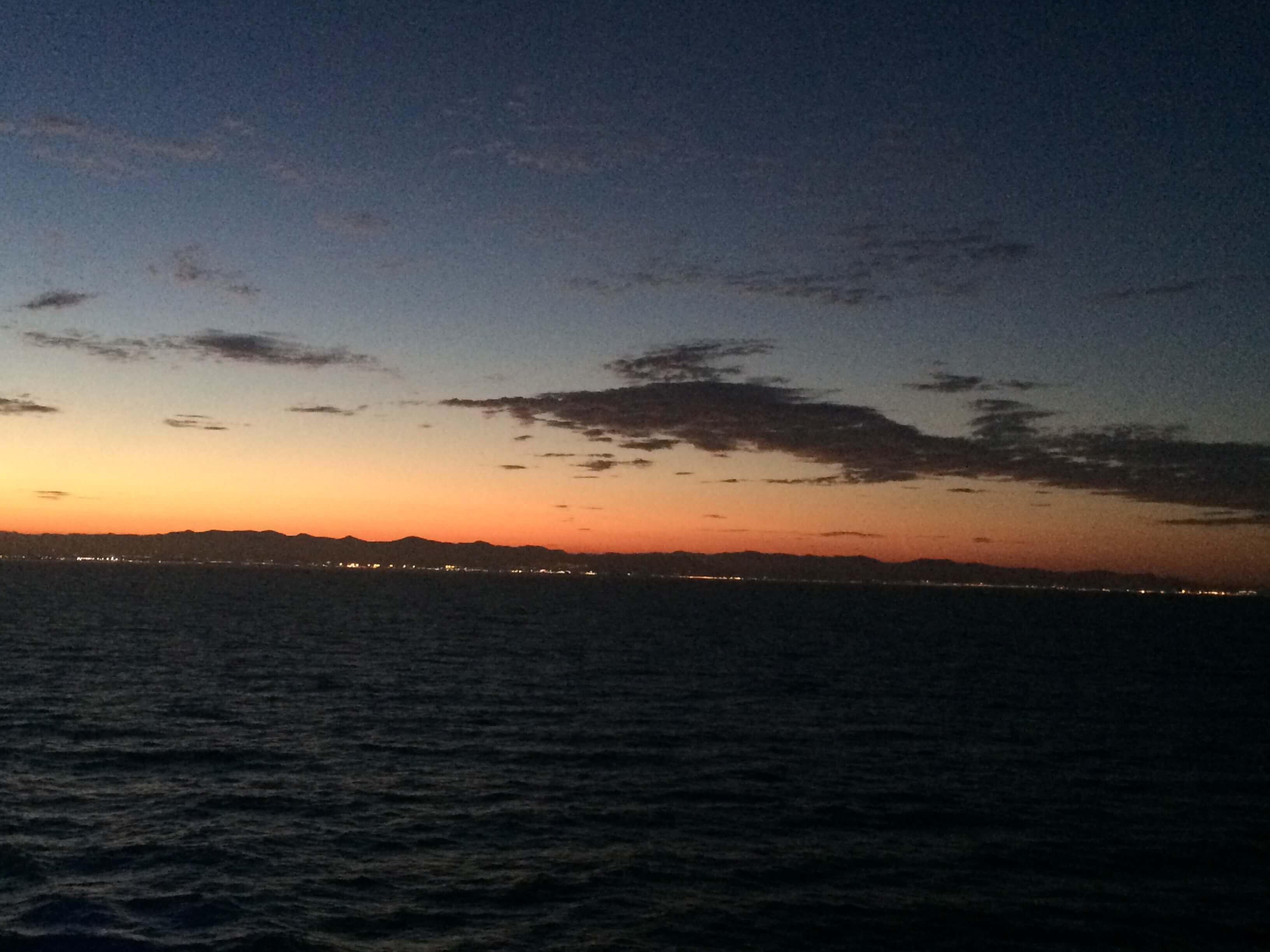 This is the story of a trip which required help. The destination was Ibiza and the volume of goods which needed transporting was too much for Mercy! (Mercy – short for Mercedes and a name I’ve given my van!)
I recruited the services of a colleague that I’d worked with on Euro trips many times before. His name is Don (aka Joe 90 or The Navigator!) Don was able to bring his Sprinter with a 14 cubic metre box trailer and the two of us now had enough capacity to complete the transport of goods to Ibiza. 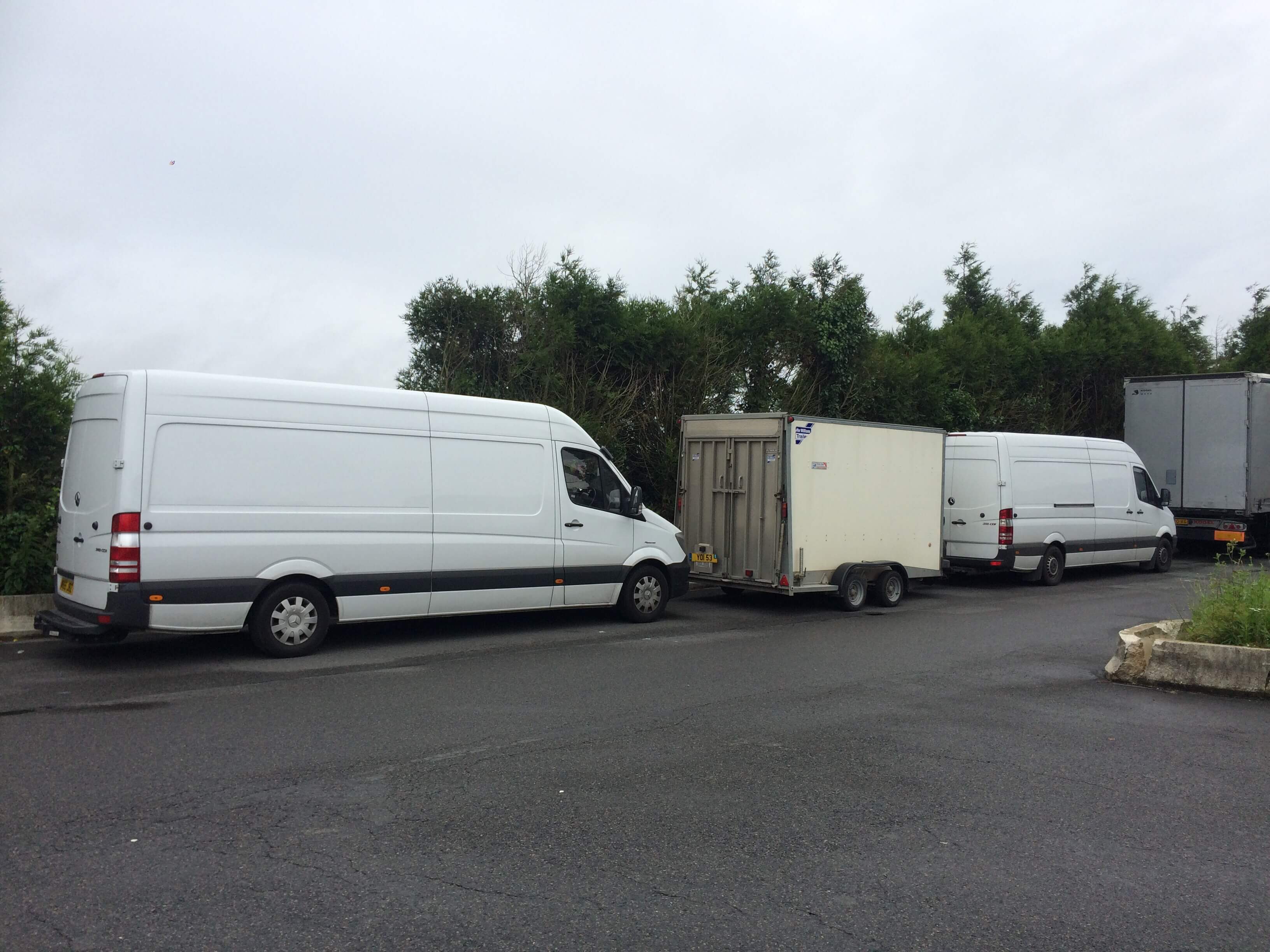 We loaded up on Sunday morning. The weather was perfect in London Bridge and the client was organised and ready to go. Most the furniture we put inside the trailer and the boxes, bags, lamps and pictures etc were all stacked into the vans.

The whole trip was organised around the ferry in Valencia. We had to be at that Spanish port for 19:30 on Tuesday in order to catch the 21:30 ferry to Ibiza port. So by leaving on Sunday, we allowed ourselves plenty of time. 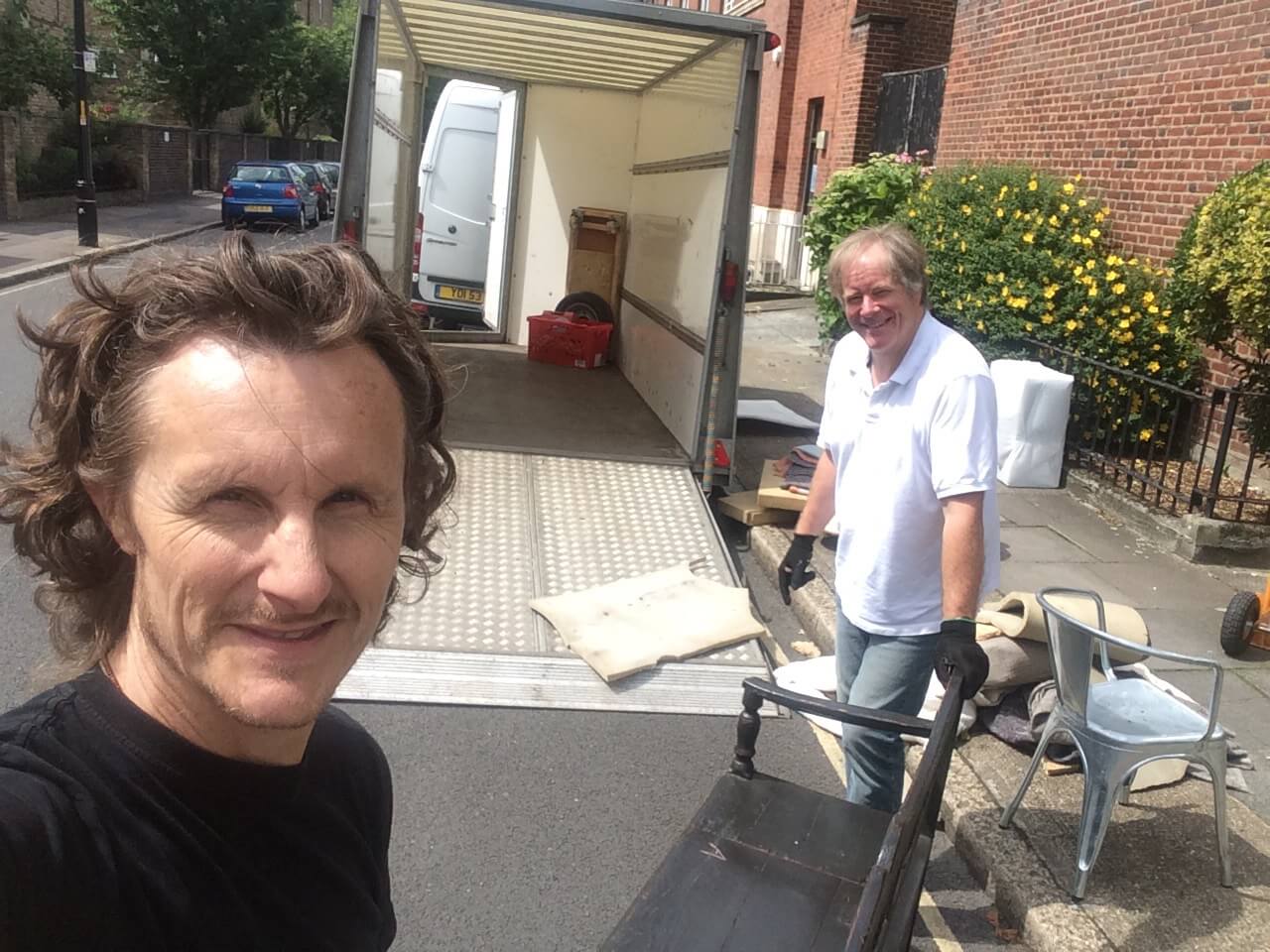 Our route was set to take us right through France and, because it was going to work out the shorter route, we headed for Paris. Normally this is not a great idea! But as we were destined to hit Paris at midnight, we thought traffic would be kind to us.

As it so happened, the roads were relatively quiet and so our decision paid off.

We got as far as a little way south of Paris on the Autoroute when it was decided (via Walky Talky!) that we should rest up. We pulled into a service area, brushed our teeth and settled into position in our respective vans!

We awakened to the sound of raindrops on the steel roofs, which is infinitely better than being woken by the burning sun through the windscreens. Once freshened up and infused with coffee, the journey south continued.

The weather decided to change for the better, and of course, the further south we drove, the warmer the temperature became. 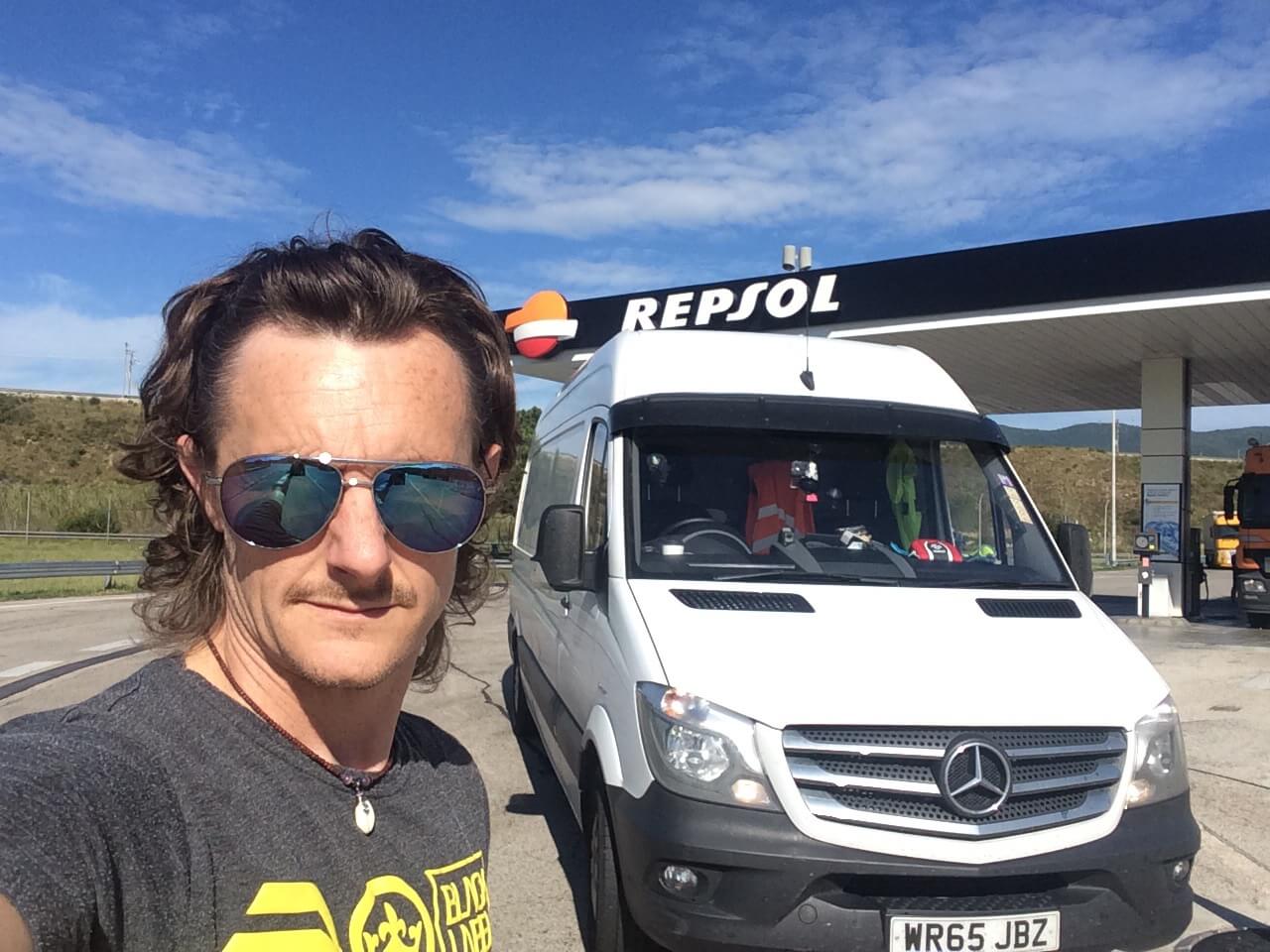 We made it as far south as the Millau Viaduct and stopped for some rest and a bite to eat. 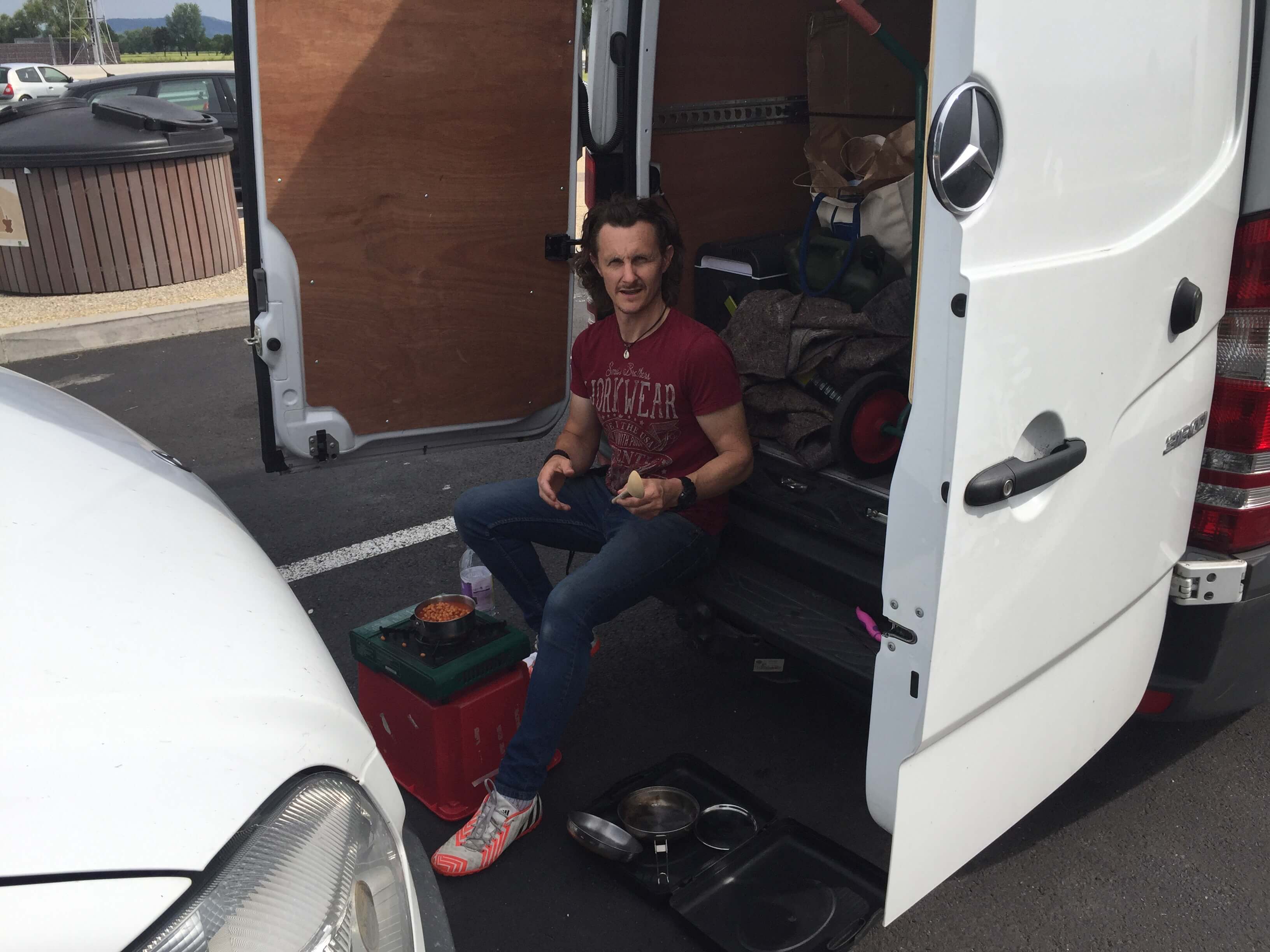 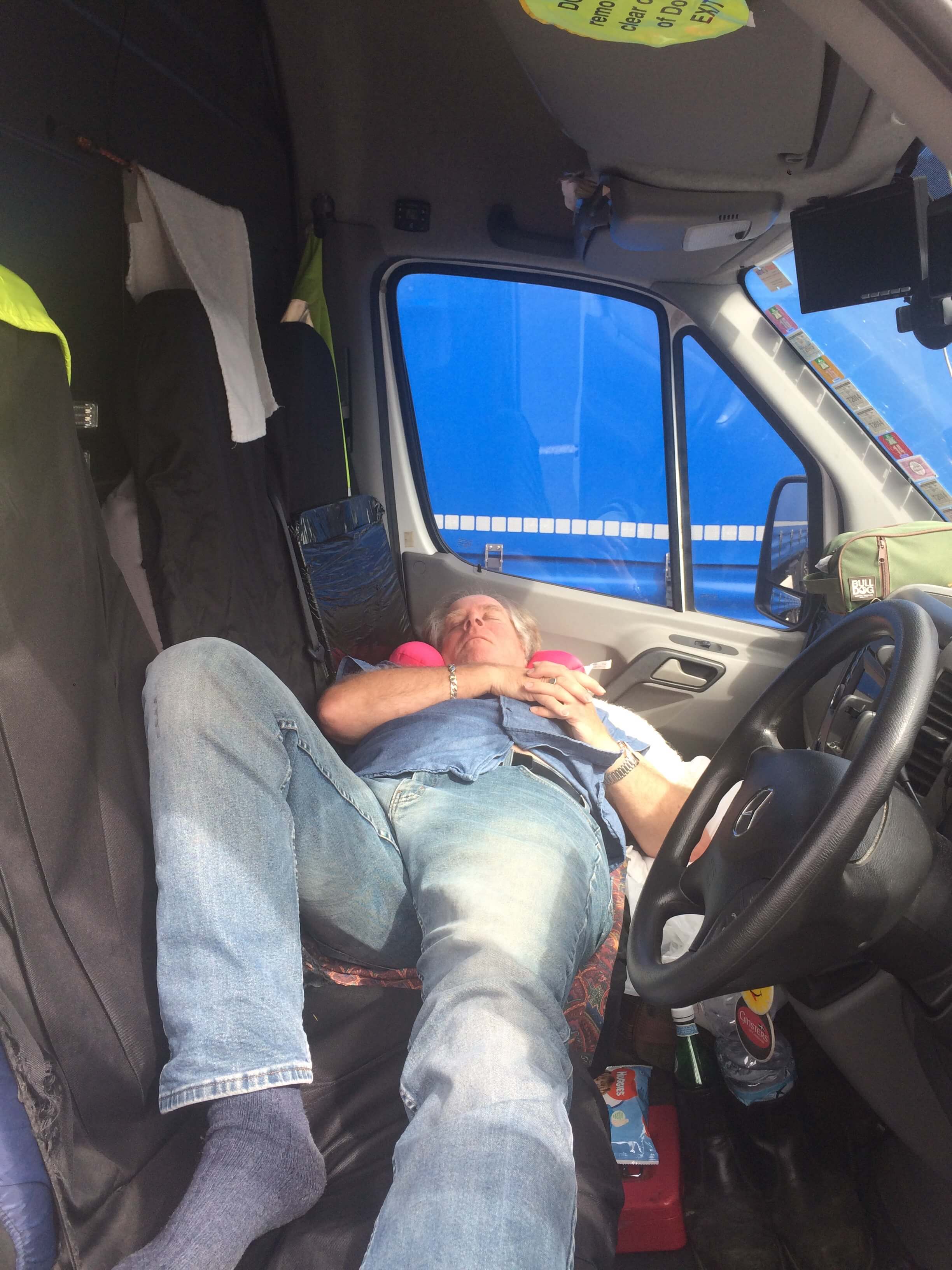 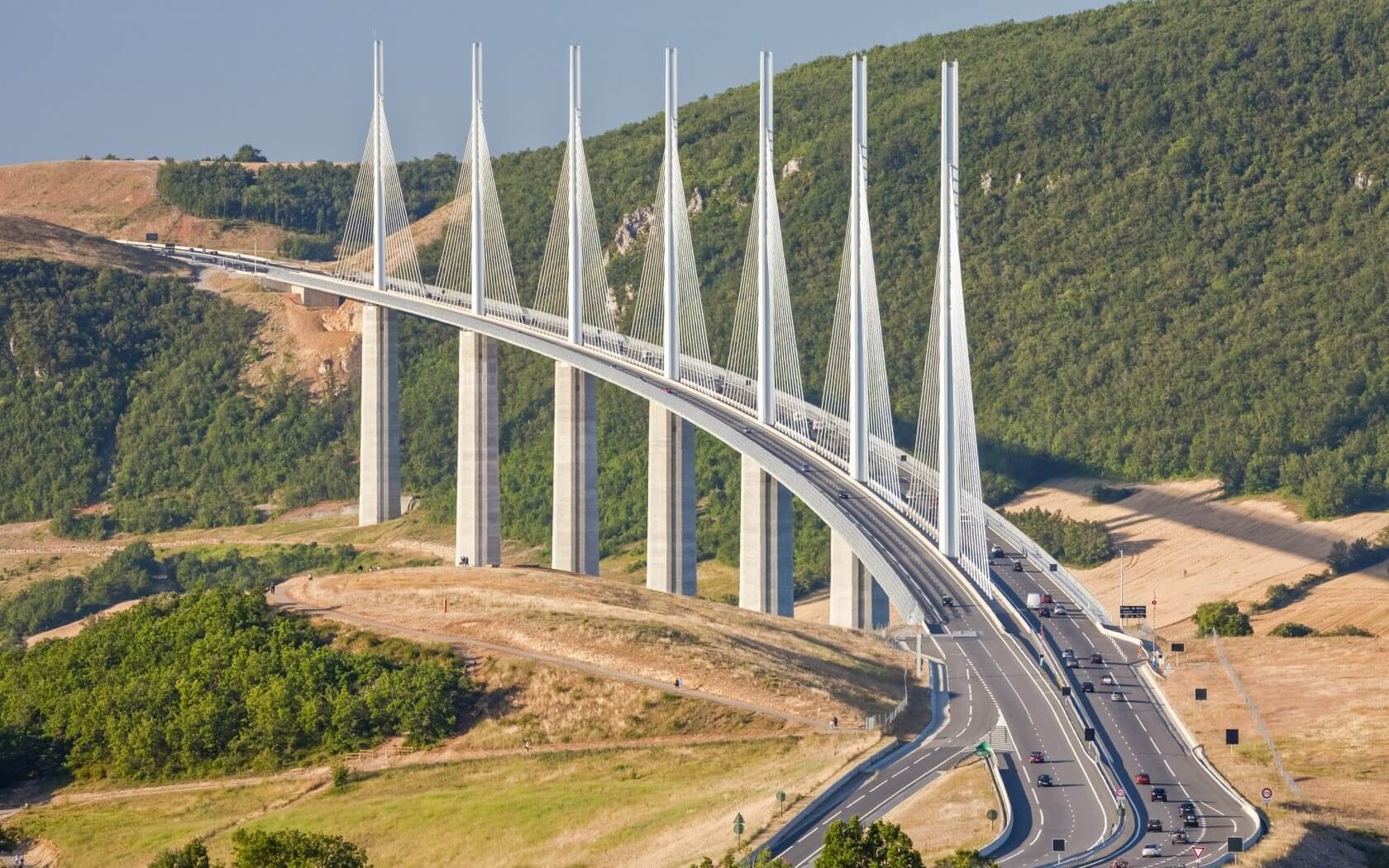 Our next stop was near the south coast of France. Hunger pangs had set in and the lure of those golden coloured arches was causing us to gravitate towards their offerings!

Don had been suffering with a bad back the whole way and this seemed to initiate in him a certain madness! The Macdonalds restaurant had just shut (for its ‘eat in’ customers) and we were forced to walk around to the ‘drive in’ window. Don, in his wisdom, thought it would be hilarious to act out a scene where he was driving a car, and proceeded to give his food order to the petrified teen employee girl whilst gesticulating crazily as if both his hands were on a steering wheel! The ‘brumm brumm’ noises and spluttering only added to the confusion and I was glad to get out of there as quickly as possible! 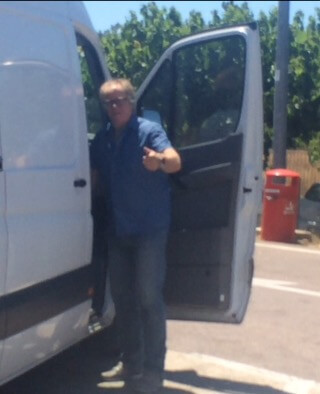 We then headed for the Spanish border and reached this point at about 1:30am. We found the nearest service area and turned in.

When dawn came, so did its heat! The Spanish sun started as it meant to continue all day – scorching!

We took the opportunity to check tyre pressures, topped up with air and headed for Valencia. 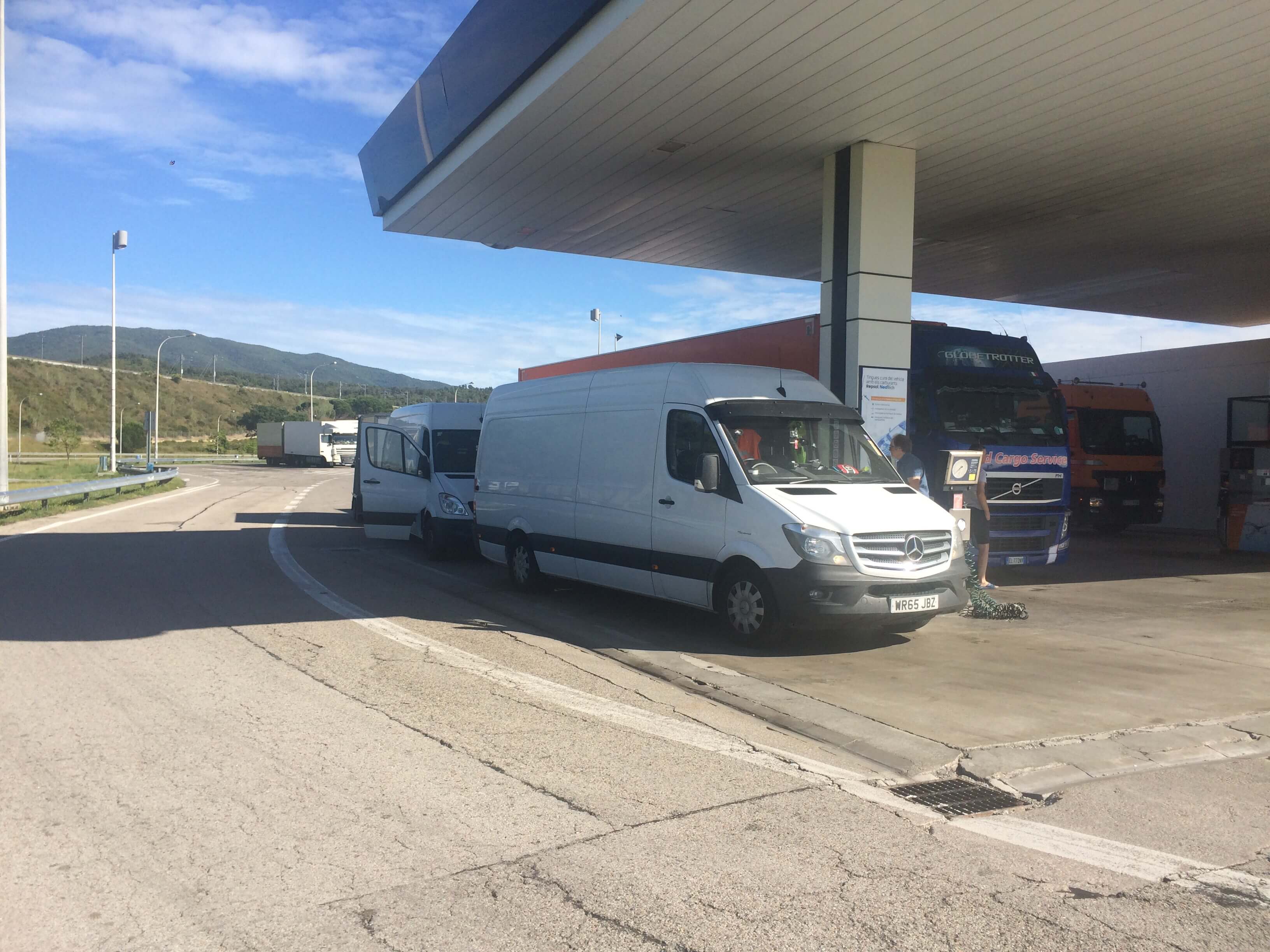 Last stretch to the ferry port

Our ferry from Valencia was at 21:30 but we needed to be there two hours in advance. We made it with hours to spare, sorted the tickets in the air-conditioned ferry offices and cooked up some sausage and beans while we waited! 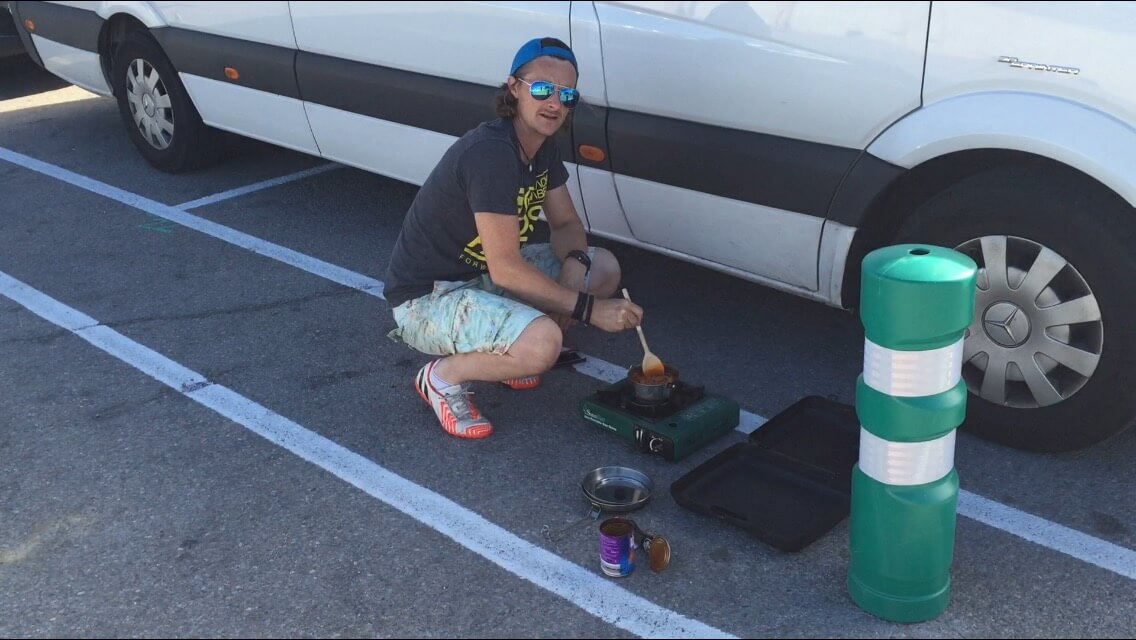 After being directed into position at the terminal queue by men with whistles, our wait was only interrupted by some random checks by the local police who were only interested in a quick peak in the back. We were ushered through a gate then, by the ferry staff, and up a ramp to the boat where a complicated process was in place to organise a mix of vehicles that mostly had to do three point turns and park in strange fashion. 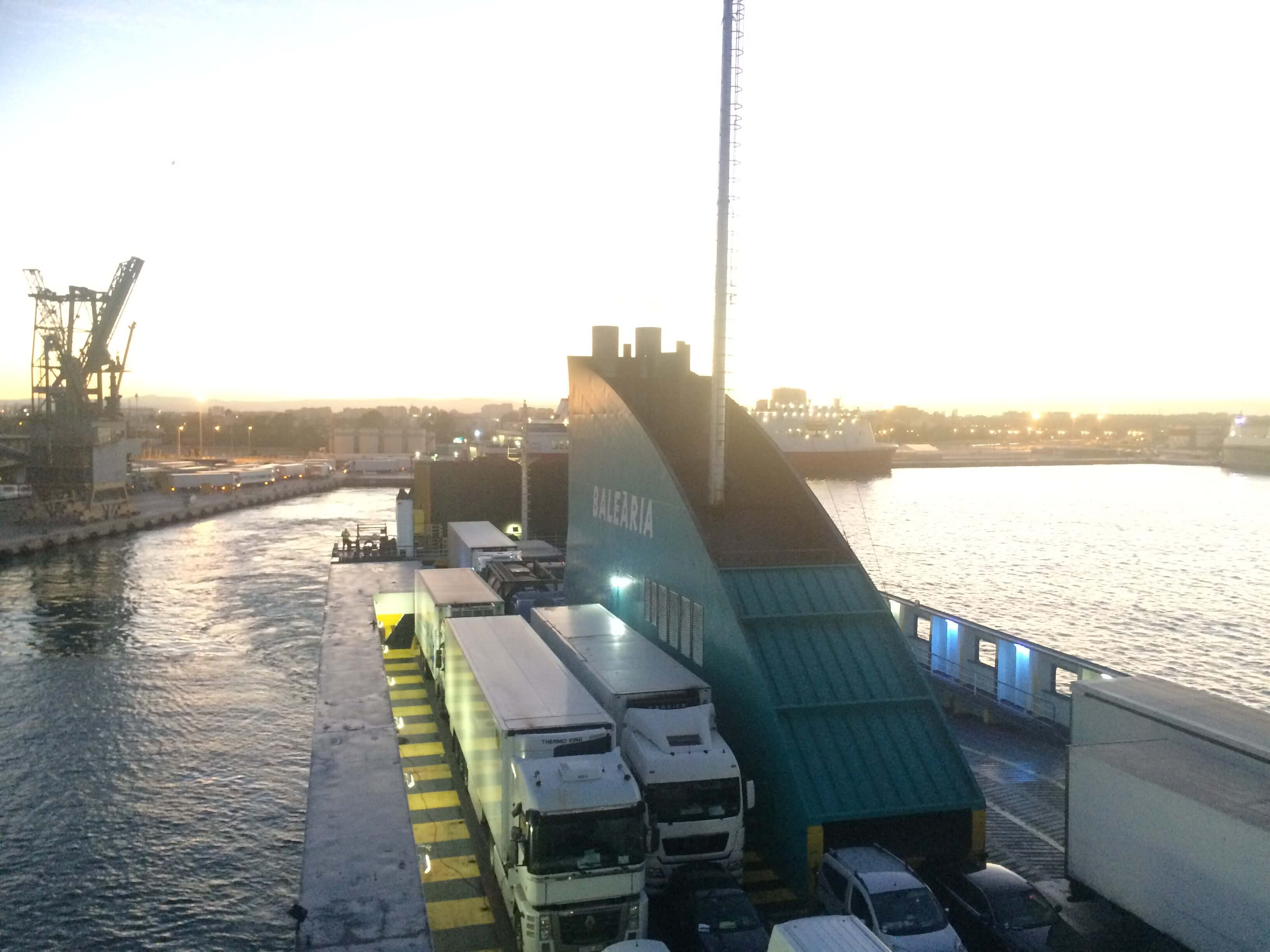 We then made our way to the bar, bagged our seats and then made plans to find the cafeteria!

The food tasted terrible but maybe it was the fact that I’m not used to artichokes made of rubber with mash potato that had the consistency of semolina! 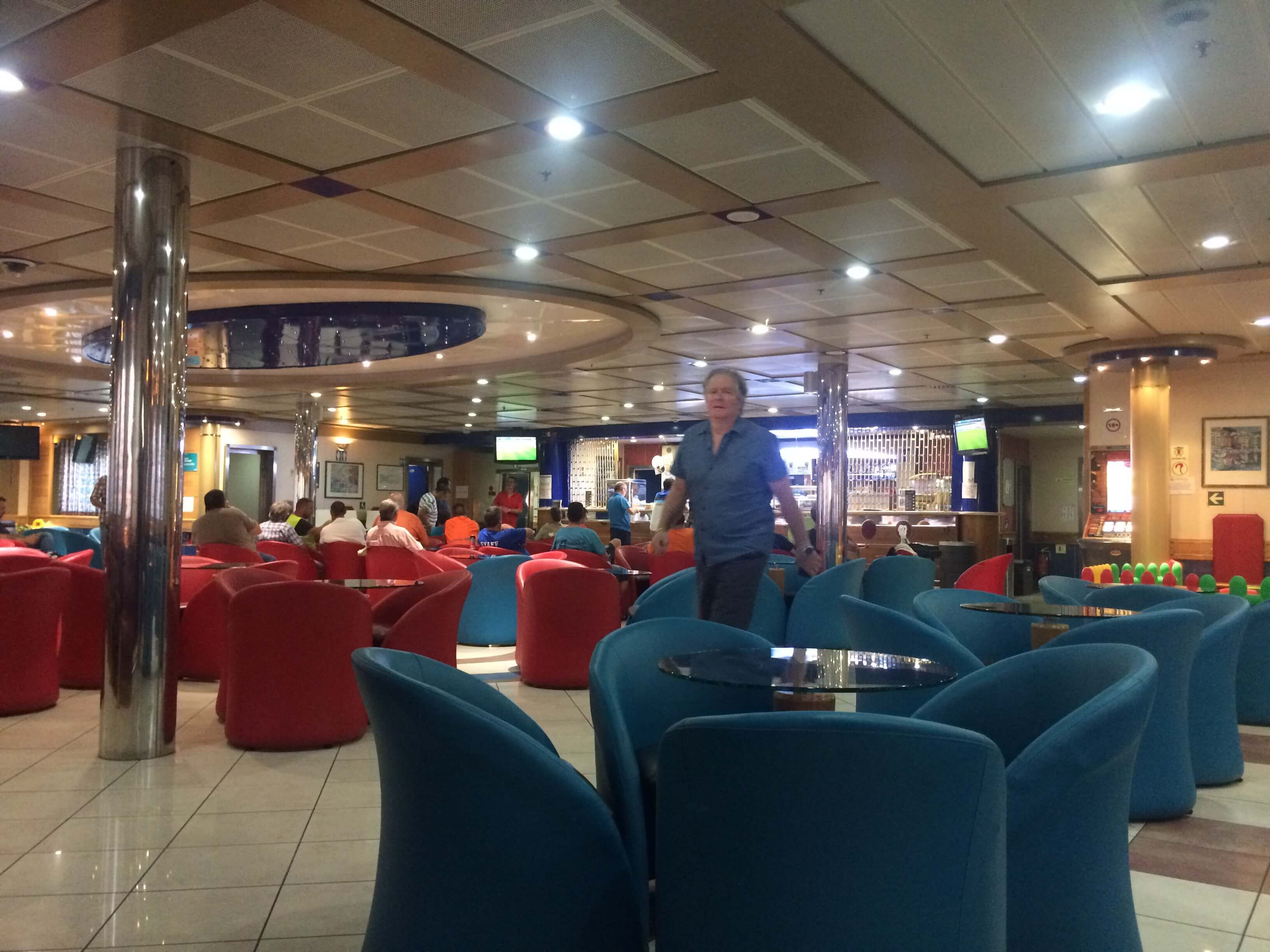 The ferry was basically a floating disco, although, to be fair, much of the area could be used to avoid the partying. With lights flashing, bass pumping and repetitive beats a-beating, it would be entirely clear to a lost dolphin that he was in the general area of Ibiza!

I tried to get some sleep in an upright position, as there were no spare spaces for lying flat. Don lay snoozing with his new Bluetooth Bose headphones on whilst my head would do that dropping thing every time I managed to sink into unconsciousness!

We arrived at the Ibiza port on the south side of the island. It was about 3am and the client would be ready for our arrival at 7:30am. So a brief, 4 hour sleep in the van was in order, as we were only 30 minutes from our destination. 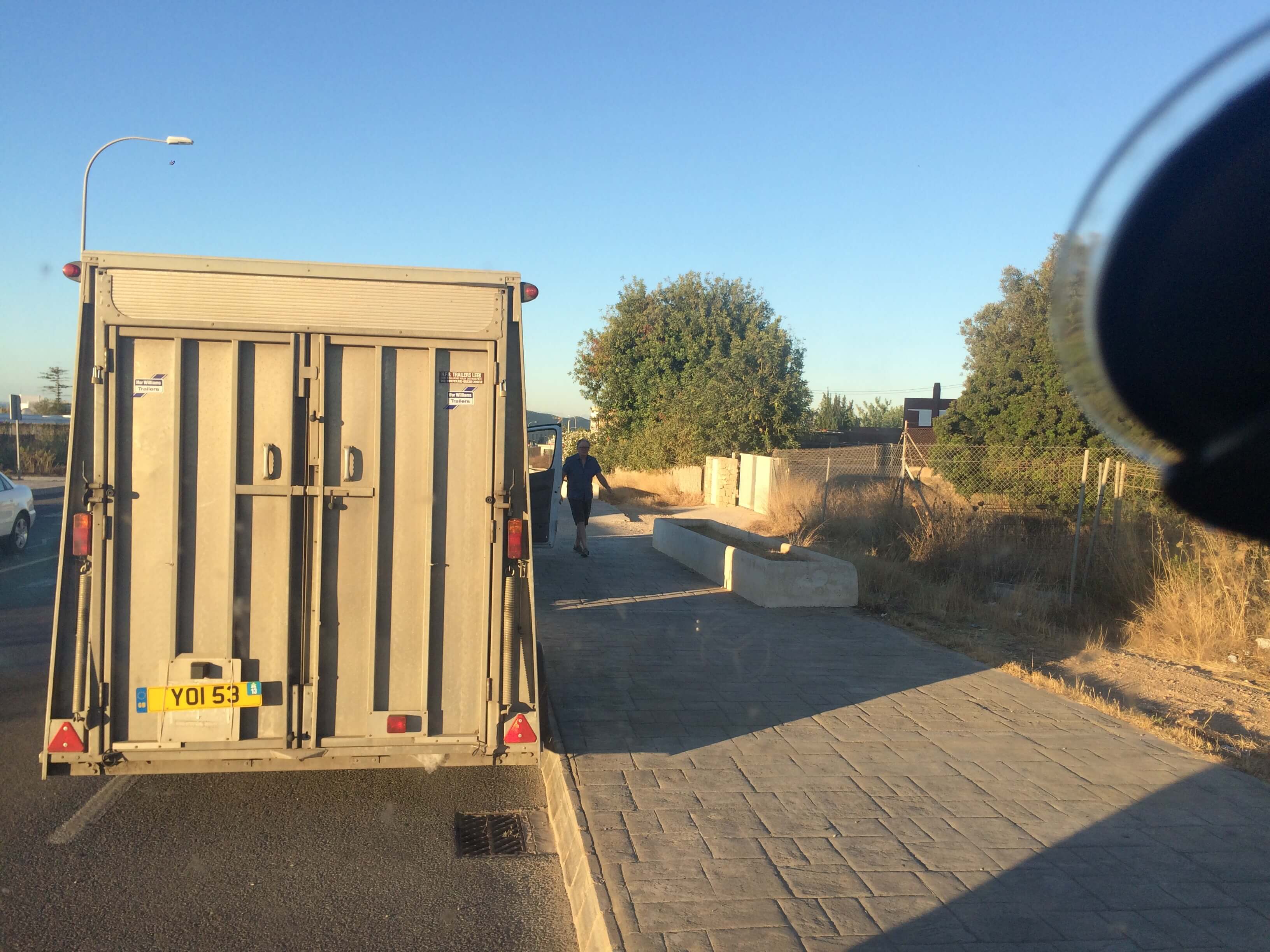 The property was a very old villa set deep in the country, away from any sign of hedonistic revelries and surrounded by all manner of plant life. The new owners were renovating it as part of their new Holiday Letting project. 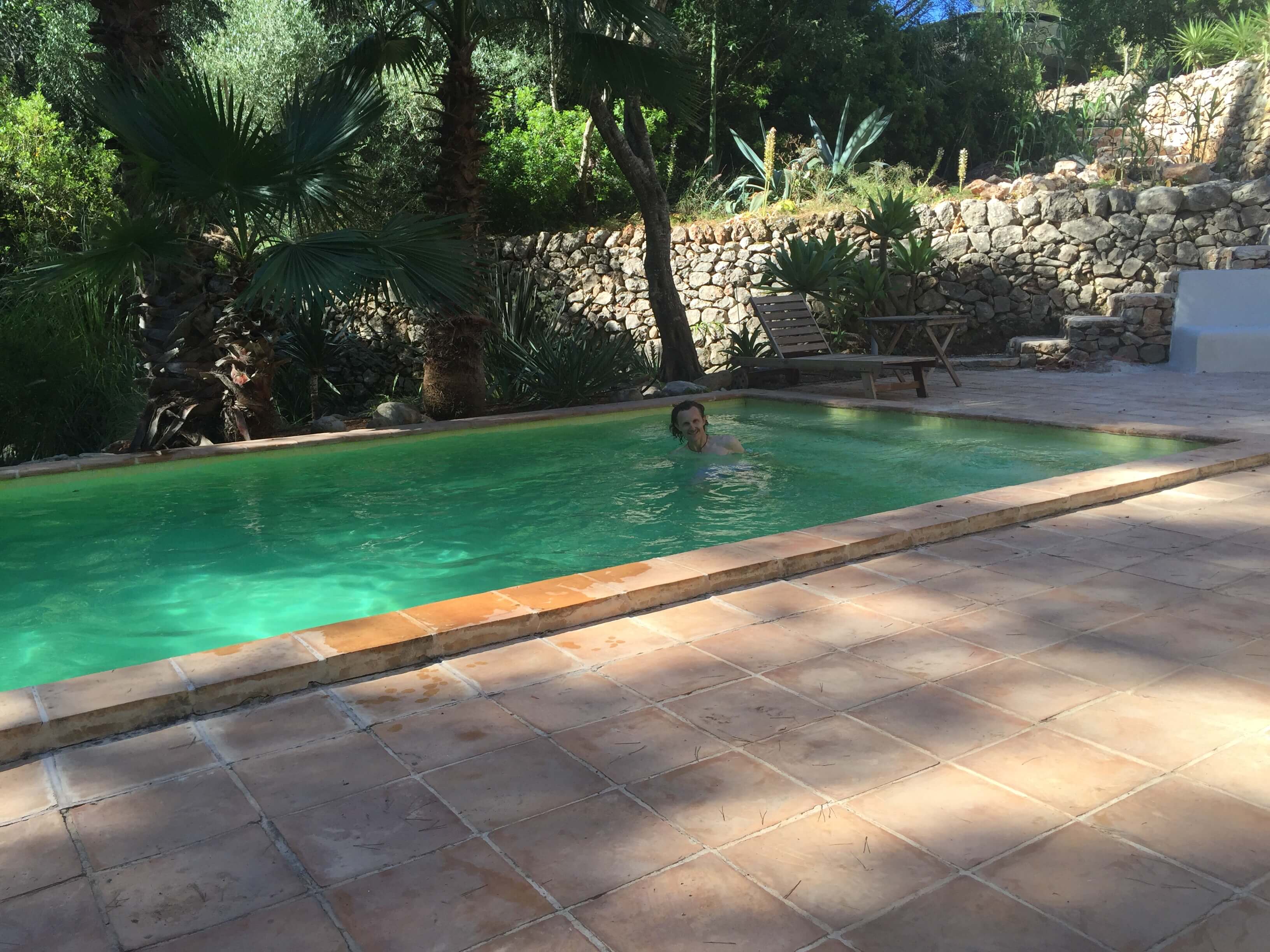 The pool was positioned in a beautiful setting low down in front of the house with a high, angled stone wall giving it shelter and privacy. Bamboo plants overlooked the wide lounging area.

It had an awesome serene atmosphere, which explains why the previous owner, a 73 year old, self sufficient feminist lady was able to achieve inspiration for her art, I’m sure. 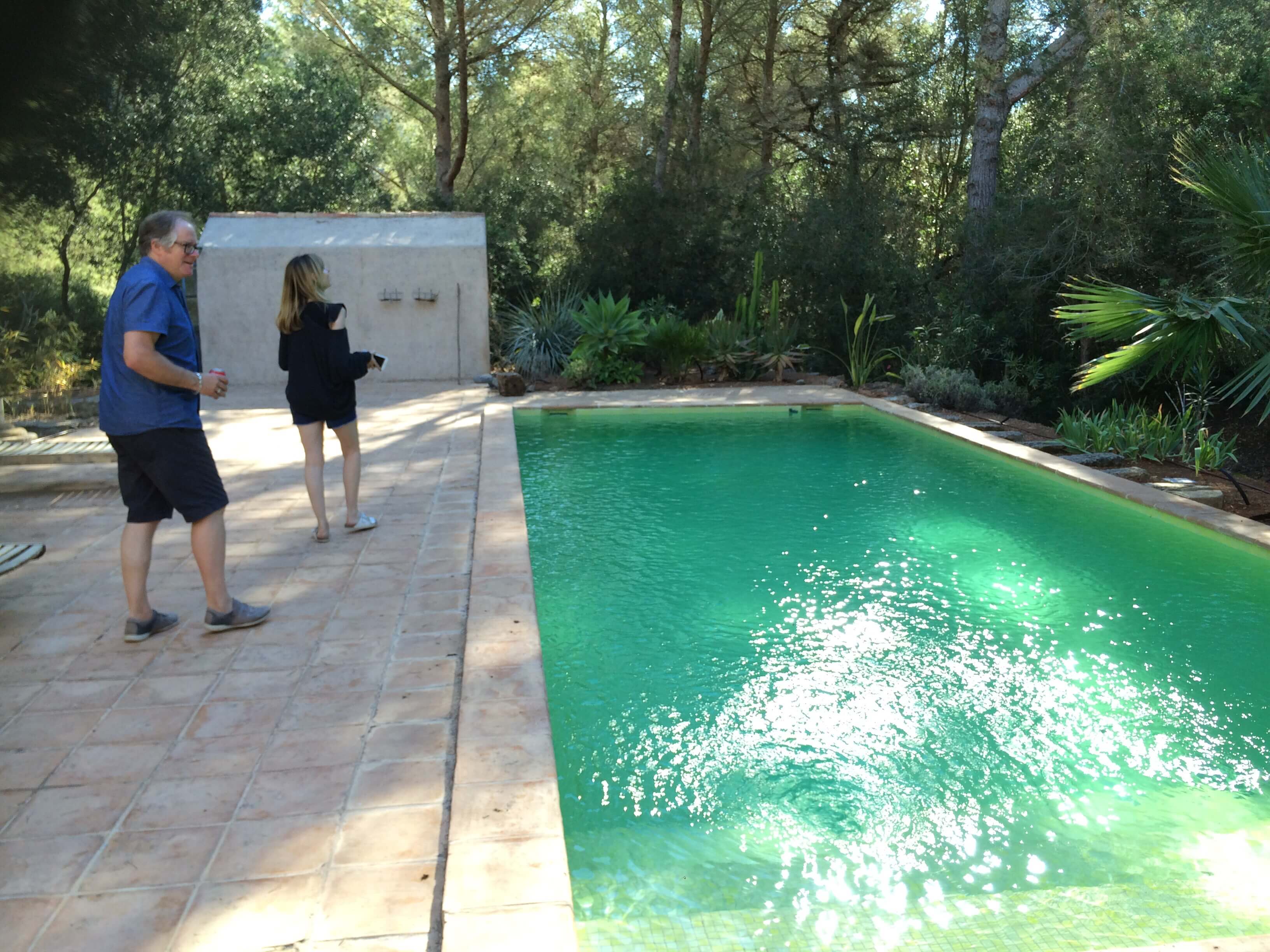 After our little tour, we started the unloading. It was tricky for “The Navigator”, aka, Don, to reverse the van and trailer down the narrow lane, with its edges bordering a drop into a dried up stream. But he did brilliantly. 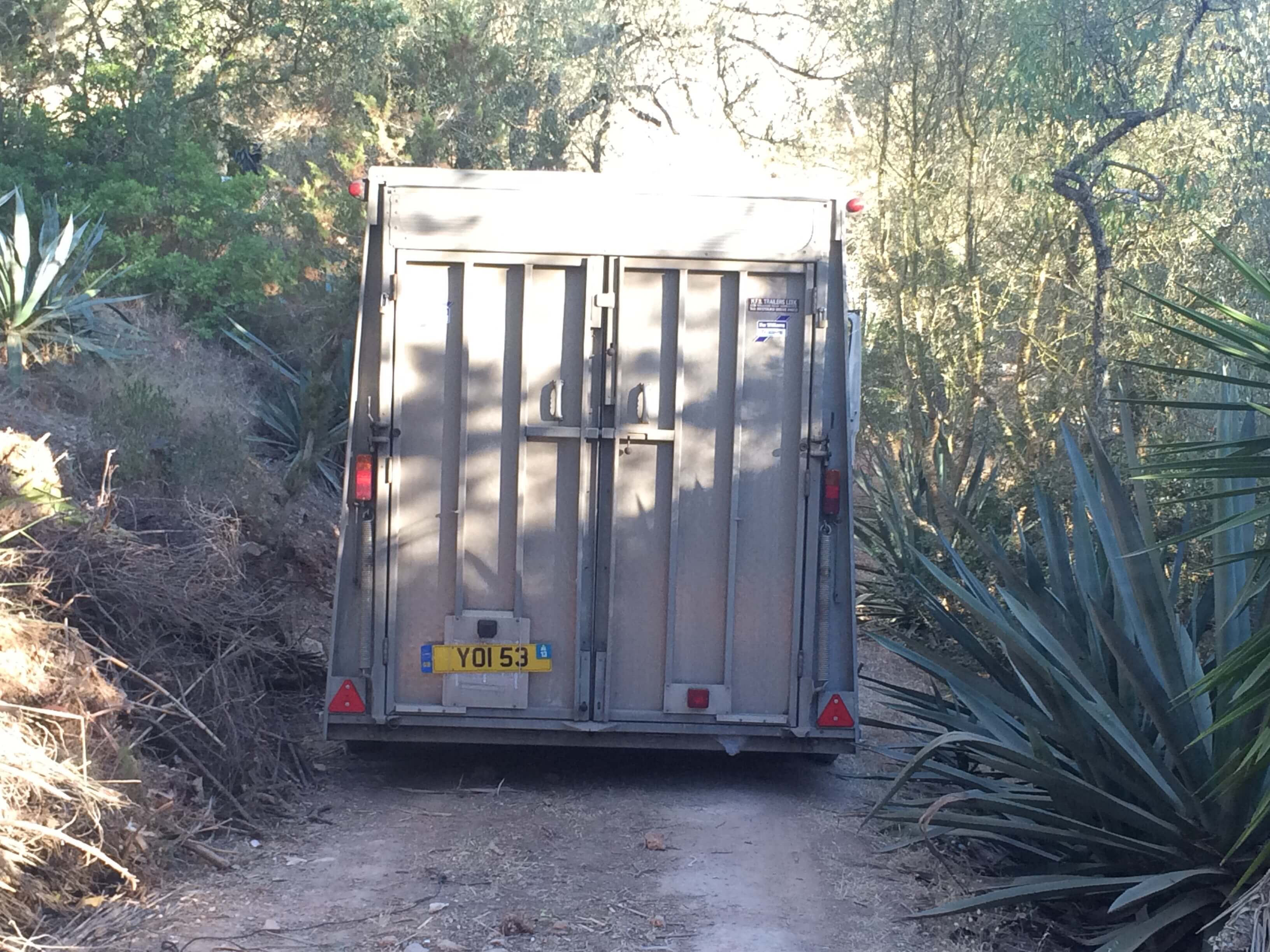 As with a lot of the destinations that I am commissioned to find when transporting goods to Spain, Italy, France and other parts of Europe, the lane in this case was not one in which a big moving lorry would have been able to negotiate. My service is a useful one when access is limited because of the size of my vehicle. In this case the customer had too much to transport for one van, but having the ability to pull any size trailer was a real help. Plus it’s great to maintain relationships with other guys who do what I do whenever there’s an even greater need for volume. 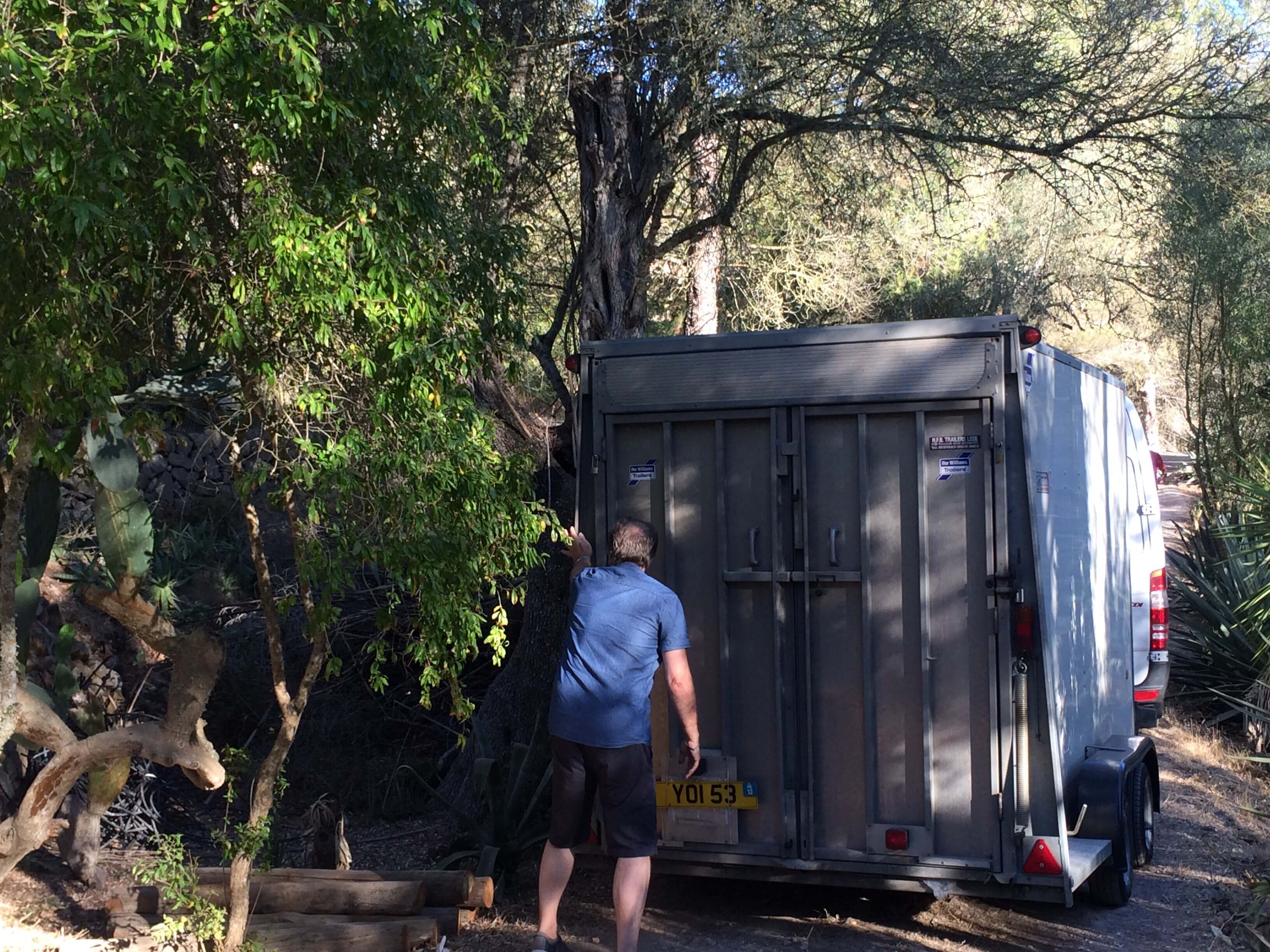 We were able to unload the vehicles in under an hour by enrolling all the on-site tradesmen in the process! At 7:30am, the process was a much cooler one, although this didn’t stop me taking advantage of a dip in the pool!

Once we were all refreshed and we’d ensured every last table leg and box of towels had been delivered, we headed for the port of Ibiza to arrive in good time for our ferry back to Valencia. 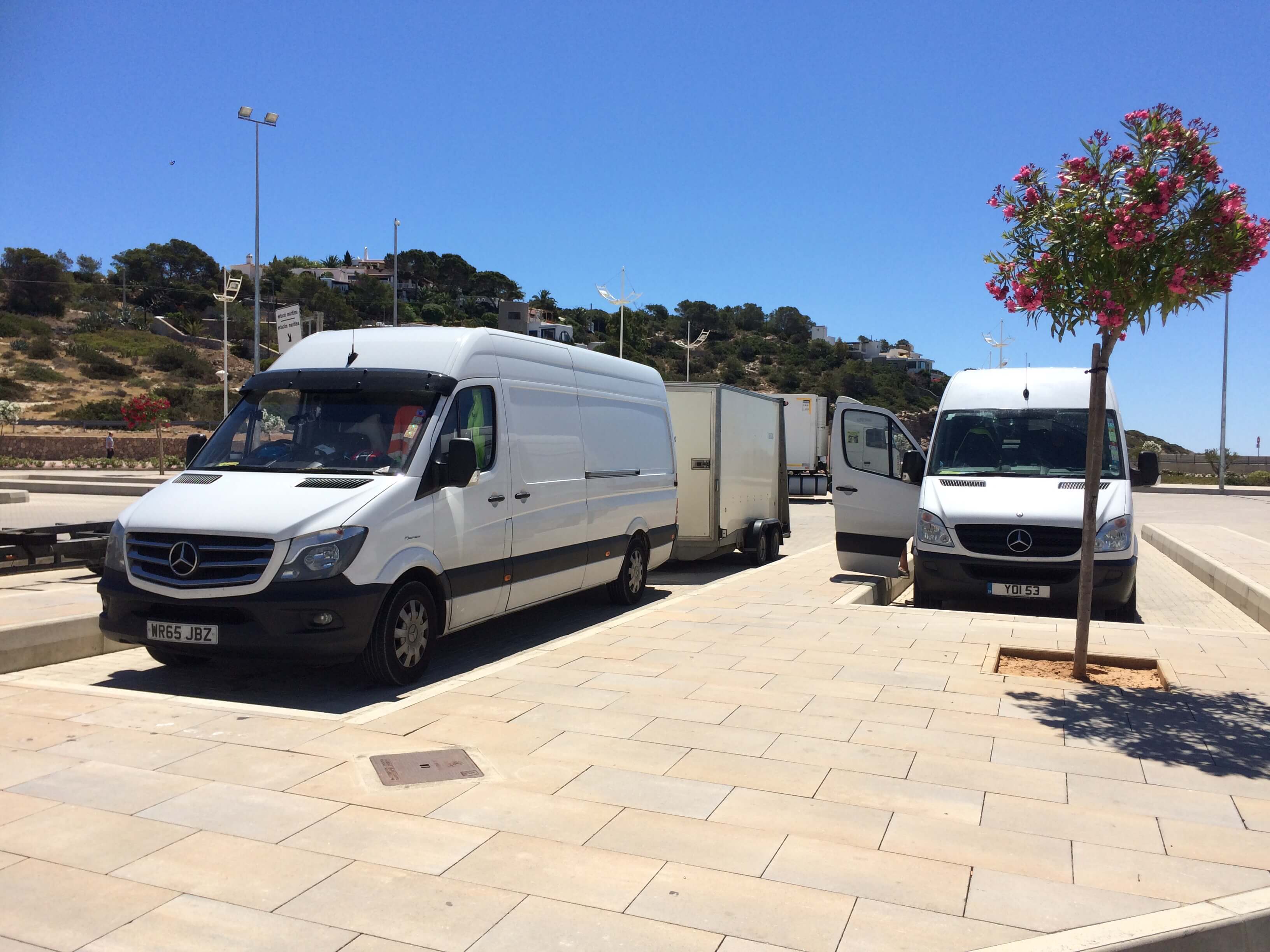 As we had two hours to kill before embarkation, we had a bite to eat. 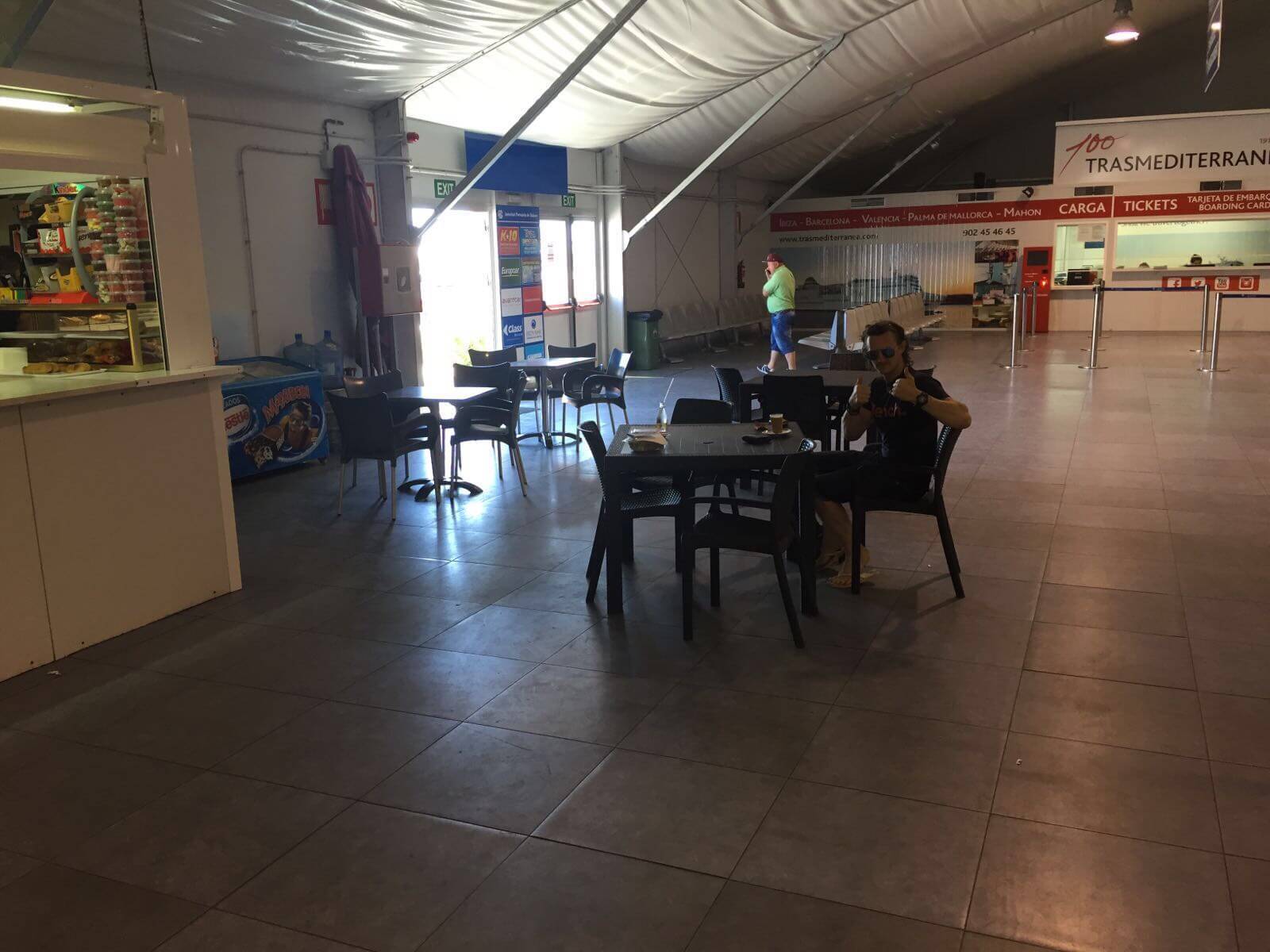 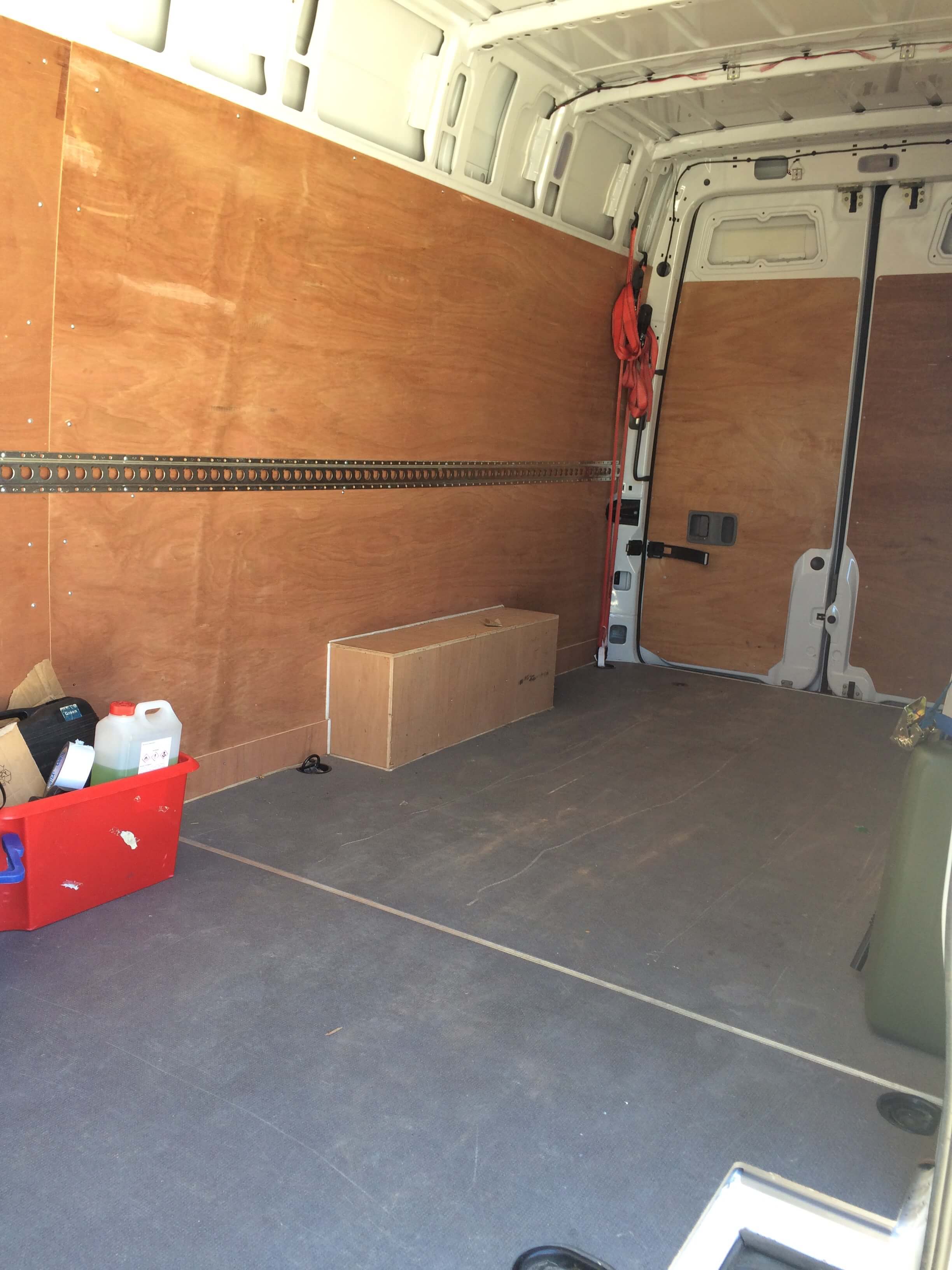 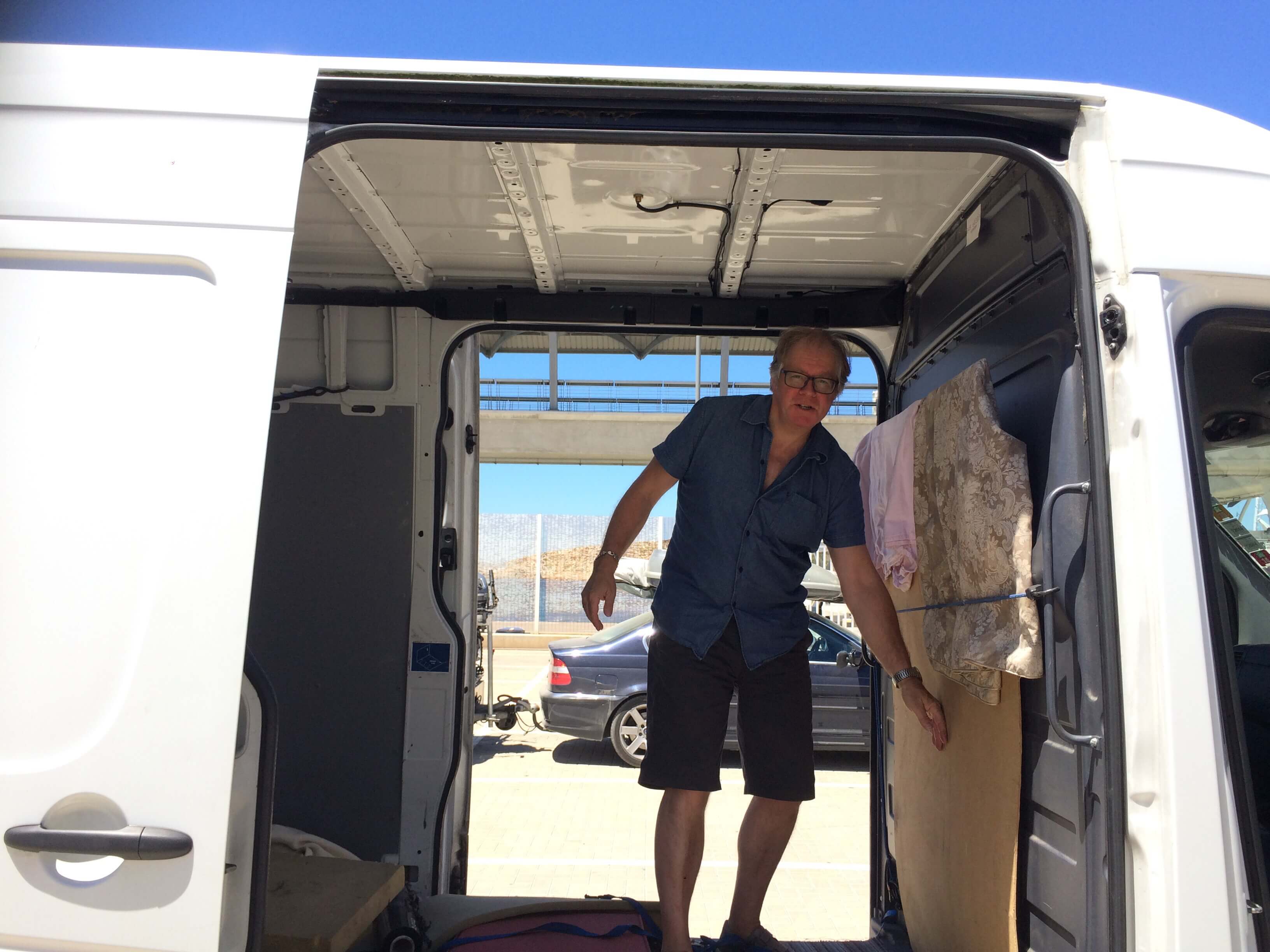 … and the burning sun helped with the wet swimming shorts! 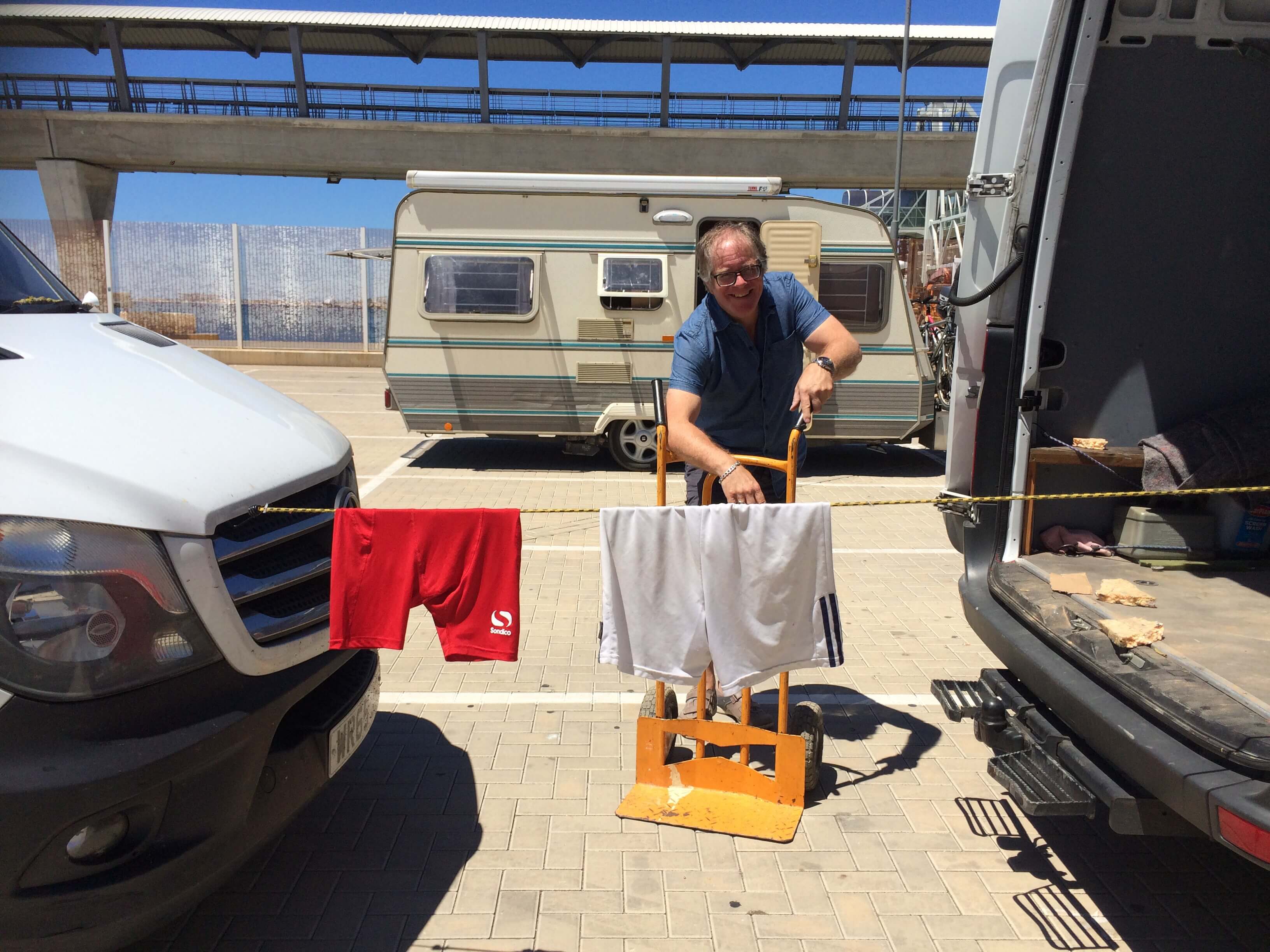 Back to the mainland

Once again, men with whistles supervised the vehicles ascension into the boat and once parked to their satisfaction, we climbed our way upstairs to the bar. 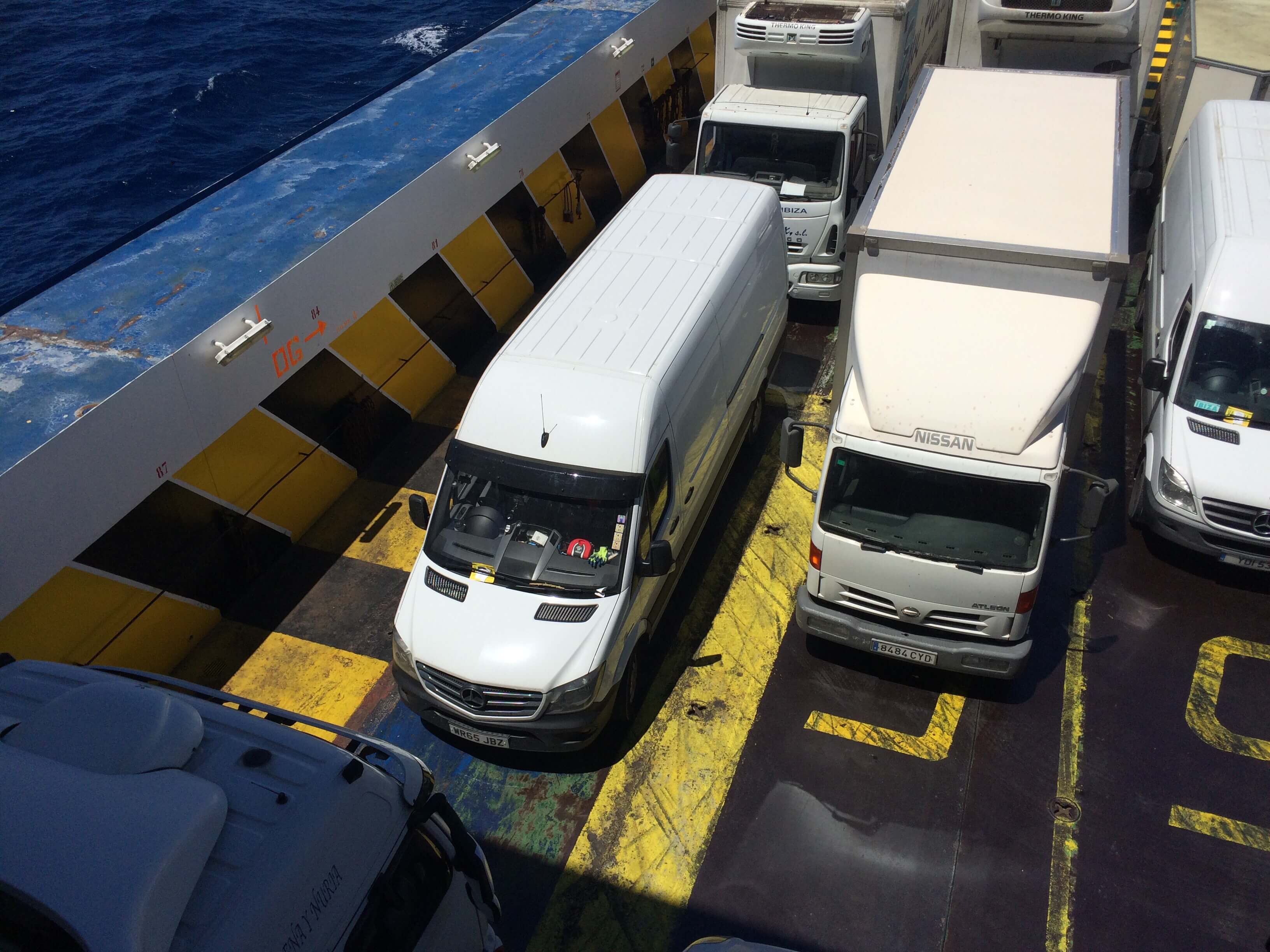 By this time the effects of reduced sleep had kicked in. Something to do with seeing empty seats in the shape of beds I think! It didn’t take long to drop off, even amongst a room where 10-12 Spaniards were being entertained in a circle, randomly clapping in sync at the fella doing tricks!

After my snooze I succumbed to a chocolate cake followed by a wander out on deck. 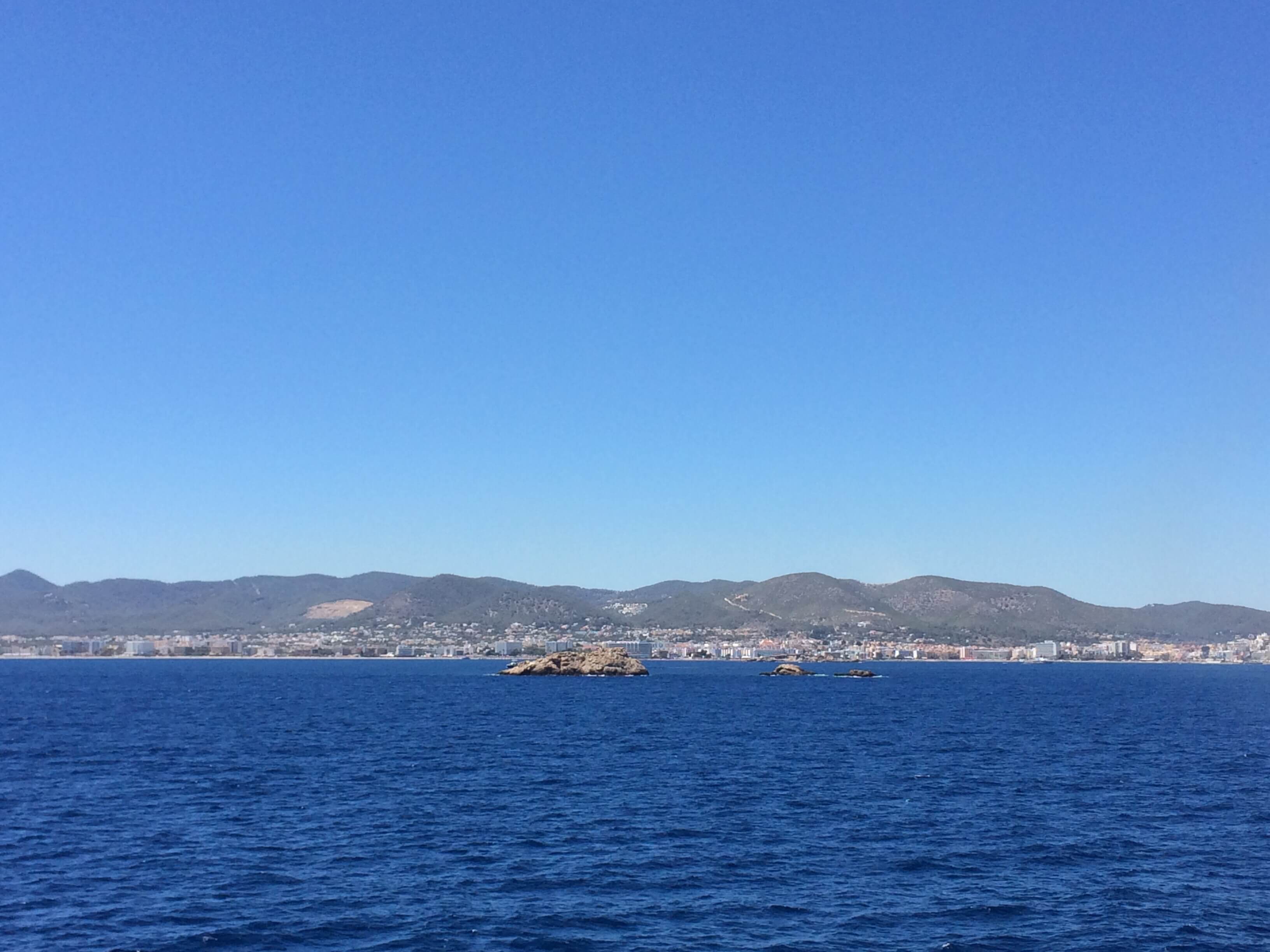 After 5 hours blogging, eating, snoozing and searching online for potential van loads from Spain to UK (using the brief spells of Internet data available!), we arrived at the Valencia port.

I wished we’d had more time to see this beautiful city with its wide, open palm tree-lined roads and architecture. But alas, we needed to make our way back. 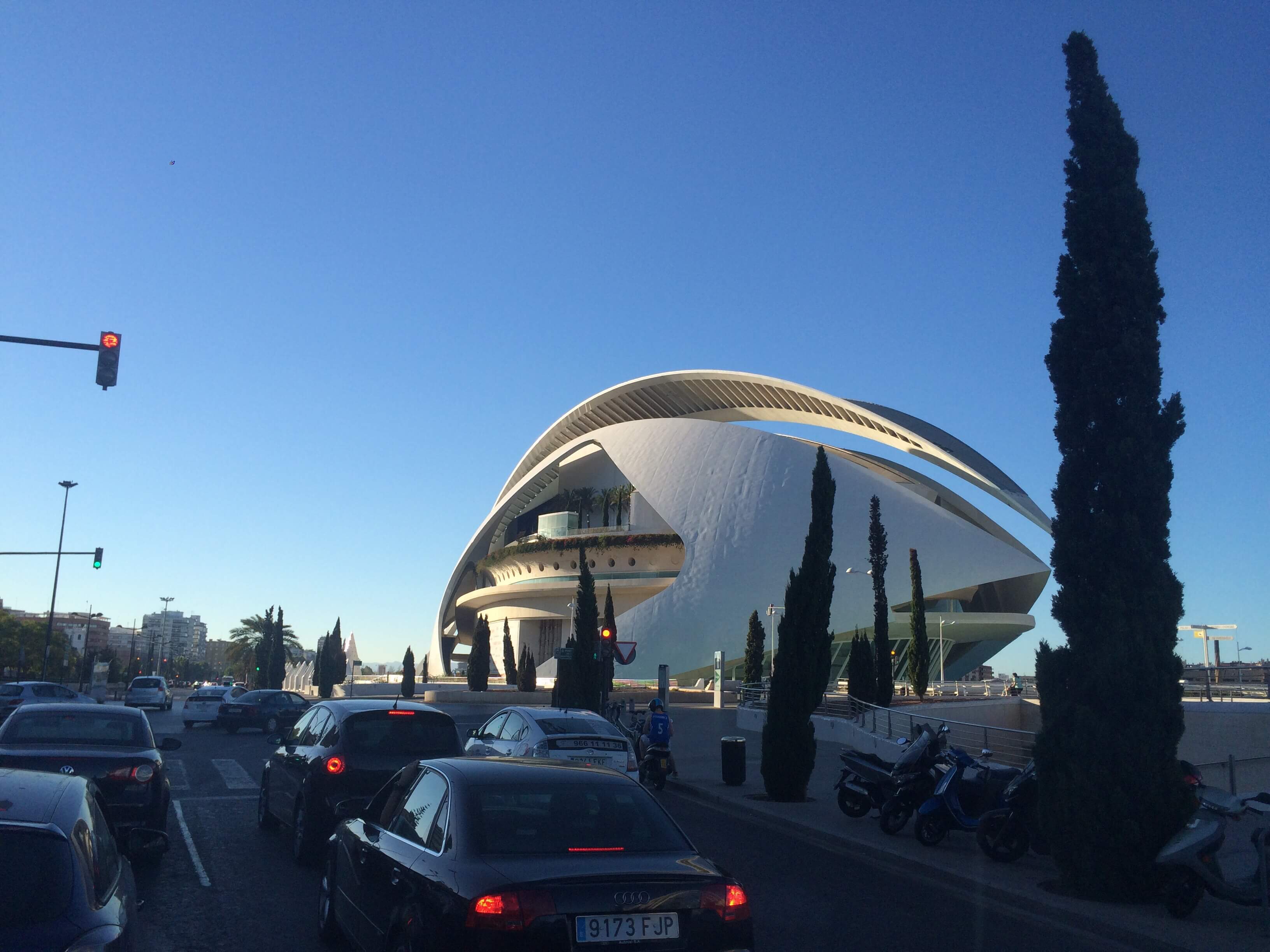 The journey north was beginning at dusk and so it was time to consider our next location for a sleep.

We arrived at a service area north of Barcelona, fuelled up and grabbed hold of about 6 hours sleep.

Again, the burning sunshine was very unpleasant to wake up to inside a van cab! But at 8:30am, it was probably a good idea to get going. 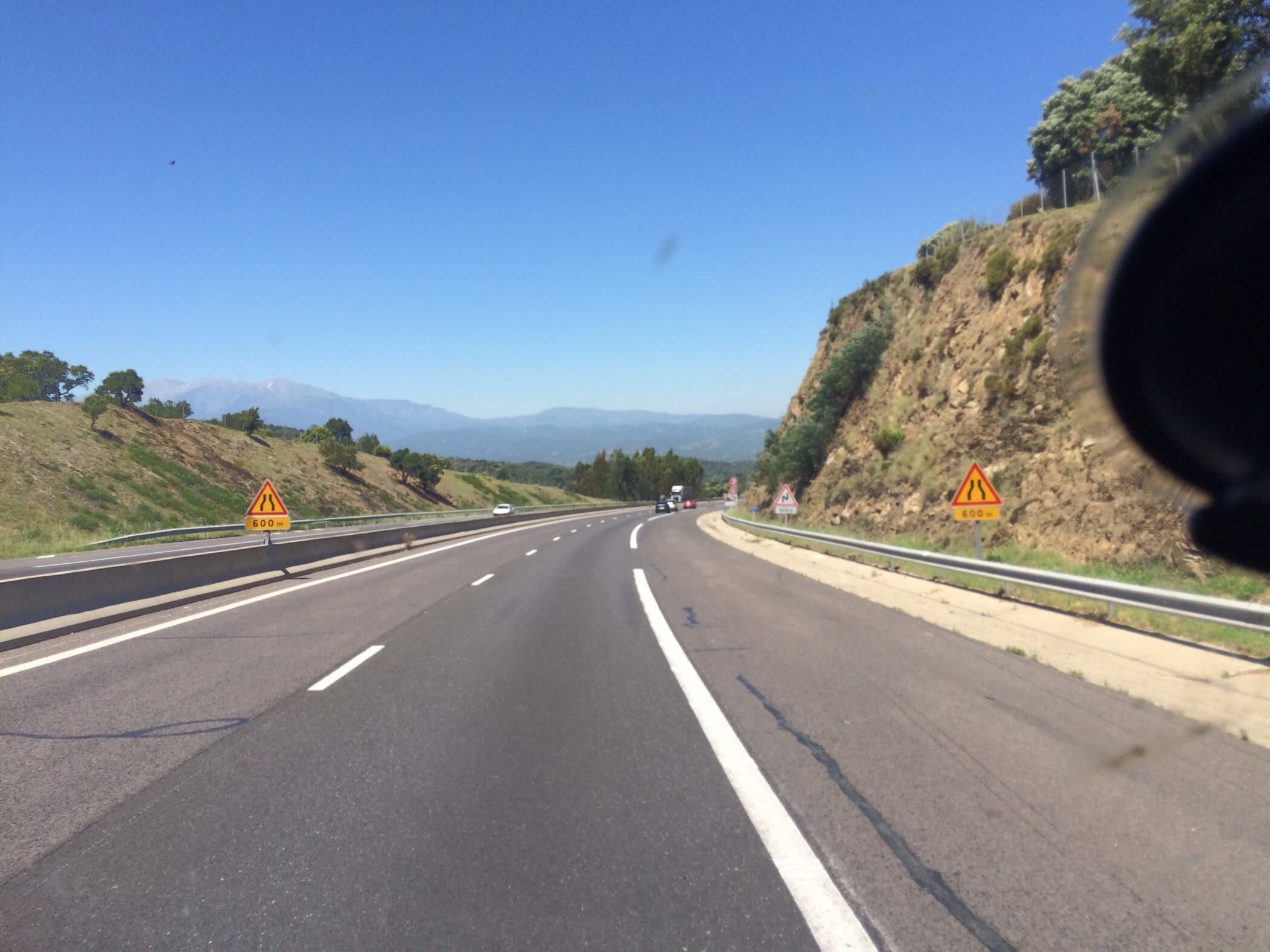